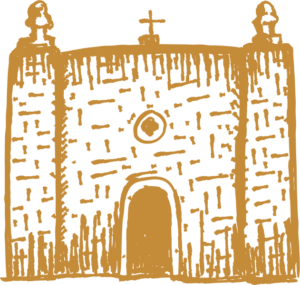 Calistoga, CA Aug. 7, 2021 – Trudi Angell, of Bell-Mare Productions has won a prestigious Award of Merit from the IndieFEST Film Awards. The recognition was given for Angell’s superb vérité documentary, La Recua (Rék•wah) – The Mule Pack Train, which preserves a unique facet of Old California history. The film features exceptional historical content related to early Californio merchants, cargo and trail-travel with equine. (in Spanish with English subtitles)

Filmed in the remote and rugged desert mountains of Baja California Sur, México the camera-crew and protagonists rode mules for 20 days on old trails – capturing never-before-seen sections of historic El Camino Real. This documentary will transport you back in time 150 years with its dramatic scenery and visits to historic Mexican villages with their endearing characters. Three generations of riders are led by a charismatic old cowboy, Darío Higuera, who is concerned for his grandchildren and their disappearing outback-ranch lifestyle. His own young grandson and a 10-year-old trail-savvy cowgirl add sparkle to the story as they herd a dozen pack-donkeys loaded with sugar-cane candy, 40 pounds of dates, 80 pounds of aged goat cheese and 10 gallons of artisanal wine for 200 miles on fading mission trails, traveling from a tiny oasis town in the heart of Baja to the capital city of La Paz … just for the sake of history!

“La Recua is superb!… it manages to tell a complete story of a man, his society and culture through the journey of the Recua”
~ Paul Ganster PhD
Institute for Regional Studies of the Californias – SDSU

Dario Higuera, protagonist / director; Trudi Angell, producer / director; and the entire production team from La Paz, Baja California Sur are very happy to have received an Award of Merit for the film. The documentary has fulfilled a dream for each of them; to preserve their roots and tell a story that honors their own ancestors’ history.

The IndieFEST Film Awards recognizes film, television, videography and new media professionals who demonstrate exceptional achievement in craft and creativity, and those who produce standout entertainment or contribute to profound social change. Entries are judged by highly qualified professionals in the film and television industry. Information about the IndieFEST and a list of recent winners can be found at www.theindiefest.com.

In winning an IndieFEST Film Award, Bell-Mare Productions’ first feature documentary joins the ranks of other high-profile winners of this internationally respected award. Rick Prickett, who chairs The IndieFEST Film Awards, had this to say about the latest winners, “The IndieFEST is not an easy award to win. Entries are received from around the world from powerhouse companies to remarkable new talent. The IndieFEST helps set the standard for craft and creativity. The judges were pleased with the exceptional high quality of entries. The goal of The IndieFEST Film Awards is to help winners achieve the recognition they deserve.”

For more information, or to book a screening of the documentary, please call Trudi Angell 707 888-2065 . Visit LaRecua.com/press, like us on FB, see @larecuamovie

La Recua (Mexico-USA, 2021) is the opera prima documentary from the U.S.A. based tour operator of 65 years of age, Trudi Angell, whom lives in Loreto as of three decades ago, and the leatherworker of 70 springs Darío Higuera Meza, whom has a modest little ranch in the Sierra of San Francisco, in the northern part of Baja California Sur. One day, the good Darío, he of the easy smile and cascading mustache, between pills and soreness, had an idea that would only occur to a leisurely mind. Blessed idleness.

Decided, he called his friend Trudi and talked to her: why not revive the world of the muleteers, that universe, vanished over a century ago, when there were no automobiles and all Baja California was connected through the narrow roads only transited by beasts of burden? Darío knew very well of which he was speaking, although his knowledge was merely a childhood memory, for his grandfather was an authentic muleteer and would tell him about packing burros, what they would trade, which roads to take, when, and where to rest…

And so, building on the original idea of Darío, Trudi, who had never before participated in the making of a movie and who, she has confessed in a certain interview, did not know that she not only had to find a camera person but also a sound person, gave herself over to the task of forming a production team that on one good day, the 27th of march 2018, accompanied Darío and his family, from the Sierra of San Francisco to La Paz, a journey of 350 km in the span of 20 days. We indeed have before us an exulting muleteer chronicle, filmed under the open sky and under the stars, between rocky trails and rattlesnakes, crossing deserts and dining on dried meat around a campfire, a historic journey in which 5 muleteers, atop their choice riding animals, took on 10 pack donkeys 40 kilos of dates, 40 kilos of cheese, 40 kilos of sugarcane candy, and 50 liters of Comondú wine, just to cover the costs.

La Recua presents itself as an unusual documentary film on two accounts. First of all, for the anthropological rescue of an activity that had disappeared over a century ago: the fabrication of all the leather gear that was made by don Darío himself, the selection of the self-same pack goods – the dates from the desert, the aged cheese, the traditional candy known to these regions by the suggestive name of panocha, the wine from Comondú that is traditionally pressed-, the exclusive use of donkeys and mules to pack the goods and, of course, the route itself, the ancient Camino Real, those dusty and rocky trails that one day were crossed by indigenous folk and jesuits and across which, once in a while, will appear a water well here or a stream there, to calm the thirst of both human and noble beast. And something else as well: that completely genuine ranch dialect that all of the participants entone, that song that is sung around the campfire (“La de la Mochila Azul” no less), that riddle that is released to capture our attention (“What is it that is in everything?”), that moth-eaten meat burnt in the fire that must be marvelous after an extenuating journey.

The second instance, that which does not appear on the screen, but is present outside of it, is almost as fascinating as the documentary that we are watching. Here we have, as well, an unexpected major work of documentary film directed by two debuting filmmakers in their golden years -she of 65 and he of 70- who have not made a single movie before this but let themselves be blanketed by a team of three photographers, two sound experts, and two editors, to give testimony of a truth that although quite evident is forgotten once and again. Not only is a good idea necessary – the one from don Darío-, not only is good will necessary – that of Trudi Angell-, and not only is the technical talent of those behind cameras the only factors. It is the confluence of all of the above that produces a good movie and what everyone involved accomplished with this enchanting documentary film is pure magic.

Beyond the probable Guiness record that La Recua might achieve (is there another full-length documentary directed by two golden age debutantes?), the value of this notable film is, on one side, the loving and idealized rescue of a begone activity and, on the other side, the mysterious testimony that is embodied by the making of the film itself. There, where you least expect it, bounds the hare of good film. “Que lindeza!” Don Dario would say, “What a beauty!” 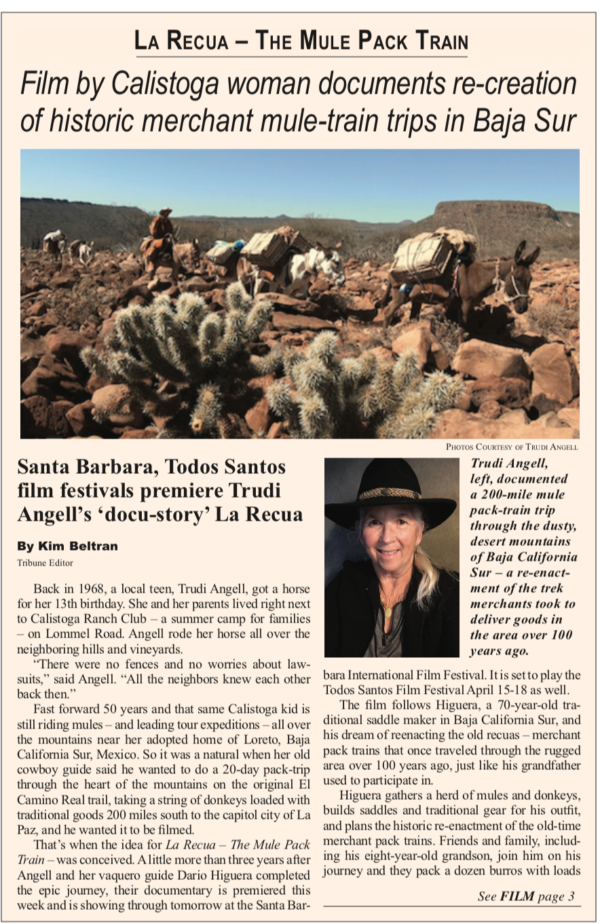 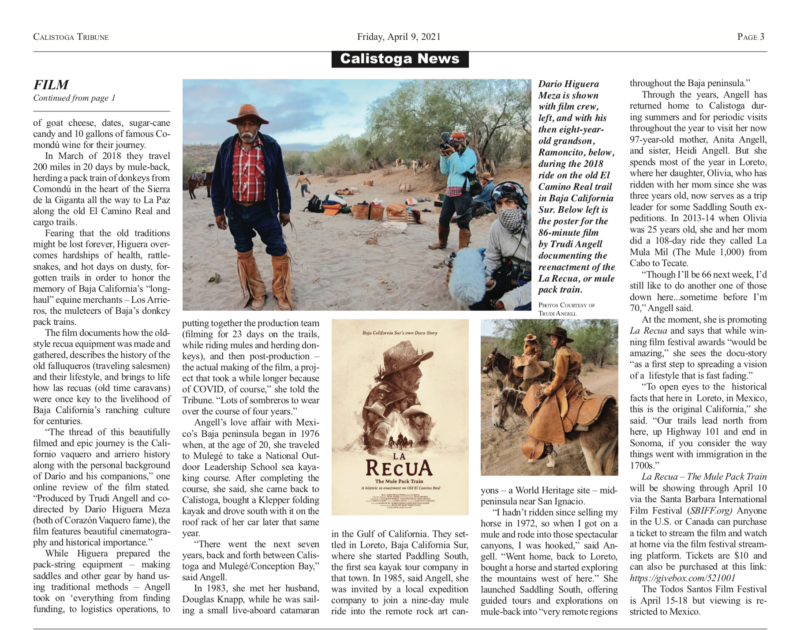 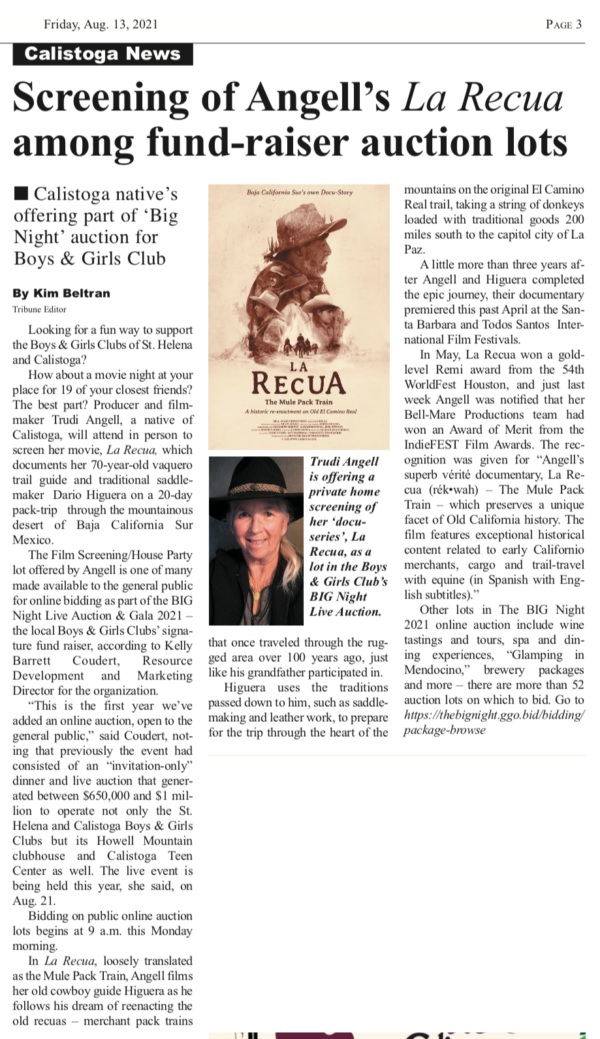